Tick Paralysis; Symptoms, Prevention & How to Get Rid of Infestations of Ticks in Fort Worth, TX; 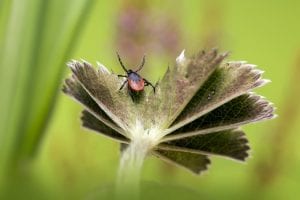 Ticks are notorious for attaching themselves to our beloved pets, but any animal would do, including humans. Ticks are not only creepy little critters, but they are known to spread diseases and tick-borne illnesses. Diseases such as; Lyme Disease, Human Anaplasmosis (HA),Babesiosis, Rocky Mountain Spotted Fever (RMSF), Ehrlichiosis, Powassan (POW) Virus, Southern Tick-Associated Rash Illness (STARI), Tularemia. But in a recent case in Seattle, a tick caused even more problems.

After a returning home to Seattle from a camping trip, a 10 yr old Shetland sheepdog started behaving differently. A week had past, and the couple noted their beloved pet was lethargic, extremely weak, and would only eat if hand fed. Naturally concerned over the odd symptoms their beloved sheltie was displaying, they took him to the vet. Blood work, urinalysis, and X-rays were performed, but alas, nothing shed any light on the subject. As the days continued, the adored sheltie was completely paralyzed, unable to eat or go to the bathroom on his own. The situation seemed hopeless. With no diagnosis, treatment, or signs of improvement, the couple had to consider the tough choice of putting him down as the sheltie’s rapid deterioration continued. During the final exam, a vet student naturally gave the suffering dog a scratch behind the ear, only to find an engorged tick, feasting on the sheltie’s blood. Next became the realization the dog was suffering from tick paralysis. Tick paralysis is rare. It happens when specific species of ticks’ saliva contaminates the dogs system over time, which then affects the neuromuscular system. Despite the fact the sheltie was wearing a tick collar, the tick still managed to attach itself. Once the tick was removed, the sheltie recovered almost overnight, his owners were summoned to the vet hospital for a happy reunion.

Though tick paralysis is rare, it can be helpful to recognize the symptoms if your dog becomes the host of a tick capable of it. It can just be one tick or multiple ticks and symptoms will generally start to manifest 6-9 days after the tick has attached itself. Symptoms can include some or all of the following:
– Vomiting
– Regurgitation
– Unsteadiness
– High blood pressure
– Fast heart rate and rhythm (tachyarrhythmias)
– Weakness, especially in the hind legs
– Partial loss of muscle movements
– Complete loss of muscle movement, or paralysis, more commonly seen in advanced disease state
– Poor reflexes to complete loss of reflex
– Low muscle tone
– Difficulty in eating
– Disorder of voice
– Asphyxia due to respiratory muscle paralysis in severely affected animals
– Excessive drooling
– Megaesophagus, or an enlarged esophagus
– Excessive dilatation of pupils

If you suspect your dog has fallen victim to a tick inflicting paralysis, or even ticks in general, take your canine to the vet and call Pied Piper Services to apply effective treatment to your home to exterminate any tick infestations.