Japanese Beetles in the USA: Damage to Lawn and Leaves in Fort Worth, Tulsa and Muskogee OK 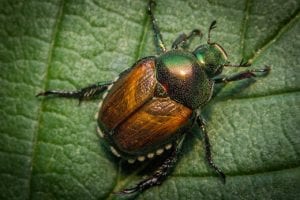 Controlling harmful insects that deteriorate the well-being of our local vegetation is vital in preventing major infestations that can have a lasting effect on the environment in which we live. One of the most destructive insects that is demolishing vegetation in many places is the Japanese beetle. The Japanese beetle is responsible for the damage of rose bushes, grapes, hops, canna, crape myrtles, birch trees, linden trees and other species. The Japanese beetle is surprisingly not very destructive in Japan, due to local predators. However in North America these insects wreak a serious amount of havoc on our vegetation.

Japanese beetles measure to be about fifteen millimeters long and ten millimeters wide. They are usually copper and green colored and have a reputation for being weak fliers. It is a myth that Japanese beetles look like ladybugs; they are a different size, shape and color! The Japanese beetle consumes the foliage of leaves that lie between the veins and is also known to eat the fruit of any plant it invades. The life cycle of a Japanese beetle is usually one year, however if they are living in a cooler climate, their chances of surviving increase up to an additional year.

Advent of the Japanese Beetle in the USA

The Japanese beetle is of course native to Japan, and made its first appearance in North America in 1916 in a nursery in Riverton, New Jersey. Since then, it has stretched over the country and now poses serious threats where ever it is found. Recently California residents were required to allow the state to spray their properties, this was a mandatory spray in an effort to help protect local vegetation and prevent the Japanese beetle from becoming established throughout the state.

Japanese Beetle Damage to Lawns and Leaves in in Fort Worth, Tulsa and Muskogee Ok

The Japanese beetle can now be found in the Central USA including Fort Worth TX, Tulsa and Muskogee Oklahoma. Japanese beetles cause a significant amount of damage when in its larvae stage, feeding on lawns and other grasslands where it will devour the roots of grasses. There are some mildly effective repellents that have shown to repel the presence of Japanese beetles. These natural repellents include catnip, chives, garlic and tansy, as well as the dead remains of beetles. Finding an effective method of controlling the insect will assist in keeping local plants safe from the destruction that is caused by the Japanese beetle. Japanese beetles can sometimes be easily controlled when in small numbers by using a mild soap water mixture. If you are experiencing problems with a Japanese beetle infestation, please contact The Pied Piper Pest Control and Lawn Care today.