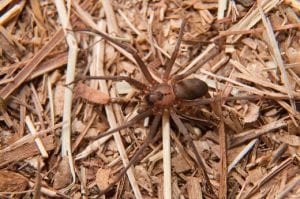 Spiders are one of the most feared insects among humans and although many of them are harmless, they will still send homeowners running for their lives. Spiders come in many different shapes and sizes. Some are hairy and some are quite large. Some spiders crawl very slowly while others move at the speed of light up your wall or across the floor, sending shivers up your spine. Spiders are not welcome and their presence results in the feeling of uneasiness and discomfort. Spiders typically don’t get a bad wrap for causing a great deal of damage to your home or transmitting dangerous diseases. However, they will bite when threatened. There are two species of spiders that everyone should become familiar with, as they do pose a serious health threat if you experience their venomous bite. These spiders are the black widow and the brown recluse.

How to Get Rid of Venomous Black Widow Spiders

The brown recluse spider follows its name and is brown in color. It has a very identifiable shape on its back that is similar to that of a violin. People that have been bitten by a brown recluse spider experience a mild stinging sensation followed by local redness and severe pain that tends to develop within the first eight hours after the bite. Brown recluse spider bites leave behind a “target” looking pattern on the victim’s skin. In some instances a fluid filled blister forms in the middle of the bite, then turns black in color after a few days. Symptoms of a brown recluse spider bite include nausea, fever, headache and vomiting. This spider tends to bite when pressed against the skin, such as when it is tangled within towels or clothes or you reach into boxes that have been undisturbed for some time. Again, it is a good idea to shake out clothes before putting them on and being on the lookout when going through storage items.

If you suspect that you have black widow spiders or brown recluse spiders in or around your home, contact Pied Piper Services immediately for expert spider pest control.